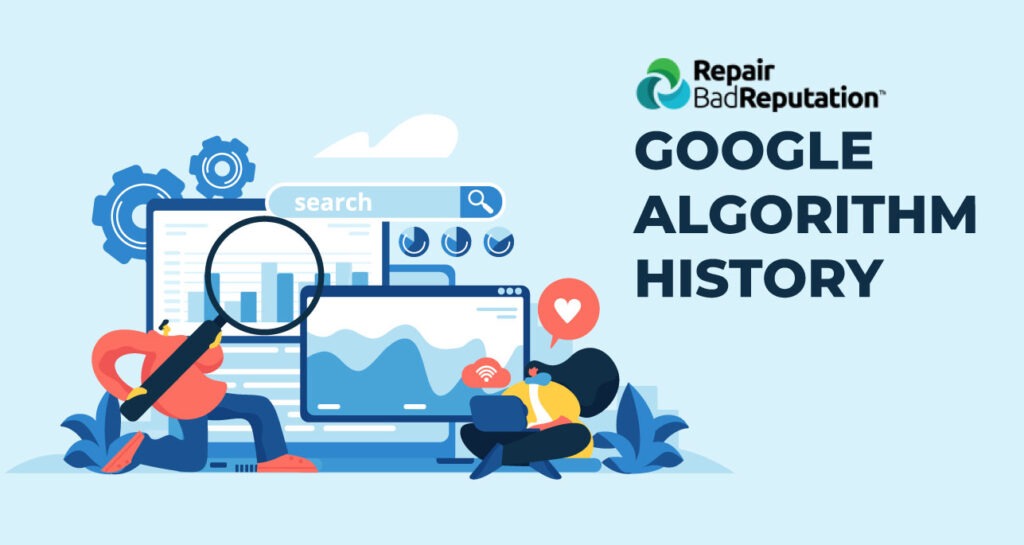 With Google as the current leading search engine, it is evident how they progressed their algorithm history in order to provide more accurate and sophisticated search results for various queries. These complex updates were mostly improved and optimized according to the violations of sites that had ranking as a motive and low-quality information as a front. Aside from BackRub, the following are Google’s core algorithm updates.

Stanford University students, Larry Page and Sergey Brin began working on a research project which they termed “BackRub”–a search engine that analyzed backlinks. WordStream (2017) emphasized that “it ranked pages using citation notation, meaning any mention of a website on another site would count it as a vote toward the mentioned site. A website’s “authority” or reliability came from how many people linked to that site, and how trustworthy the linking sites were.” Given that this was the first search engine ever created, they eventually developed it further until they arrived with the name “Google.” In 1998, Google was officially launched as it received its first initial funding.

Panda is considered the first major Google algorithm update. Its purpose was to determine whether a website offered valid information on what the visitor searched for and combat low-quality sites that were created for the sole purpose of ranking in the search engines (Hallebeek, 2020). Those that were negatively impacted the most were content farms and scraper sites as they violated Google’s guidelines; 12% of Google search results were affected. Hallebeek (2020) reported that “the Panda update has permanently affected how we do SEO, as site owners could no longer get away with building a site full of low-quality pages” (para. 4).

A year later, another Google core algorithm update was created to discourage artificial links. Yoast (2015) declared that “Google Penguin aims to remove sites from the search results that have been trying to game Google by buying or otherwise “unnaturally acquiring” links to their website” (para. 2). Once violated, Google will place a negative value on the link causing it to have a lower ranking. With this update, 3.1% of websites were affected due to black hat link building from over-optimization of anchor texts (Lincoln, 2018).

WordStream (2017) informed that Hummingbird was “the first search algorithm with the ability to parse the intent behind a query, rather than just the language itself.” This core algorithm update was intended to understand search queries further. Consequently, it led to more relevant semantic search results. This significantly improved the accuracy of Google’s knowledge base, known as “knowledge graph” given that it enabled matching of concepts and “entities.”

Pigeon is an algorithm update created to provide more relevant and accurate local search results that are closer to their web algorithm. This also enables accurate and improved ranking based on distance and location–meaning, it will be personalized according to the visitor’s location.  With this update,

HTTP stands for “Hyper Text Transfer Protocol Secure.” Based on its name, this algorithm update was produced by Google to highlight the importance of using HTTPS effectively as this secures the connection between the website and the user. This update mainly prevents others to access data or imitate the website.  Site encryption carries an essential part in SEO given that it can increase a site’s security, boost its performance, improve its search rankings, and flag it as “secure” in the browser. In simple terms, Shepherd (2019) emphasized that “it can be surmised that users would rather click through to a website where they feel that their personal data and information will remain private. This reason alone provides sufficient rationale for switching your website to HTTPS, as a superior user experience is a key to customer retention.”

This algorithm update was initially termed as “Mobilegeddon” due to the assumption that it would significantly impact the Google platform. During this year, Google observed that most search results were coming from mobiles, which led to this update. This delivered a mobile-friendly user experience; it worked best for mobile-friendly sites given that they were given a higher ranking in the search results. Furthermore, this was followed by another Mobile Speed update in 2018 due to the increase of mobile users. The ranking factor was still affected depending on mobile site-loading speed.

RankBrain is an algorithm update that holds one of the most obvious importance. Its purpose is to guess and find words with similar meanings in order to provide meaningful search results. It deals with past searches to determine best-matching results. This update does not give much attention to rankings due to the fact that it prioritizes the quality of content and the relevance of the results.

The aim of this algorithm update is to improve local search results and get rid of spam results that were unnecessary. According to Williams (2019) “Organisations that shared the same address, such as a shared office space, were being filtered out of the local results as Google began to only show one or two results from a single location” (para. 3). This is considered to be an advantage especially for businesses that aren’t well-known since they would still have a higher ranking depending on the location of the user.

This broad core algorithm update was produced to improve the identification of authority and proficiency online. This was done based on the algorithm’s ranking factors to guarantee that quality content places a higher ranking in the search results. Though the purpose of this update was not as clear as the others, Hallebeek (2020) suggested that “it may have been an attempt to better match results to searchers’ intent, or perhaps it aimed to protect users’ wellbeing from (what Google decided was) disreputable information” (para. 18).

This algorithm update was perceived as the “biggest change of the last five years”, one that would “impact one in ten searches.” Its purpose was to contextualize the search entries in order to deliver relevant search results. It functions by analyzing the words that come before and after each word to identify the context behind it. Instead of solely focusing on the meaning of each word without connecting it, this algorithm update certainly played a big factor in increasing Google’s ease of use.

This core algorithm update was not given any term–probably due to the broad changes it delivered. Bandt (2020) clarified that “this update was a reassessment to determine which sites had more relevant and informative content than others and gave those sites a boost” (para. 6). The following updates that followed were similar to this update; improved ranking based on the relevance and accuracy of information.

The first half of this rolled out earlier this month, factors such as mobile-friendliness, safe browsing, HTTPS/SSL, intrusive interstitials, loading speed (LCP), interactivity  (FID), and visual stability (CLS) will be enhanced. According to Google, “Optimizing for these factors makes the web more delightful for users across all web browsers and surfaces, and helps sites evolve towards user expectations on mobile. We believe this will contribute to business success on the web as users grow more engaged and can transact with less friction” (para. 5).  While this update won’t be as evident to average users, it would definitely make an impact on SEO professionals considering that they have to produce new strategies for delivering a quality page experience.

Are you finally ready to get your company’s online reputation back on track? If your answer is YES, then we are here to help.

Feel free to take advantage of our free consultation. You can contact us by phone at (888) 805-4121 or by email at info@repairbadreputation.com.